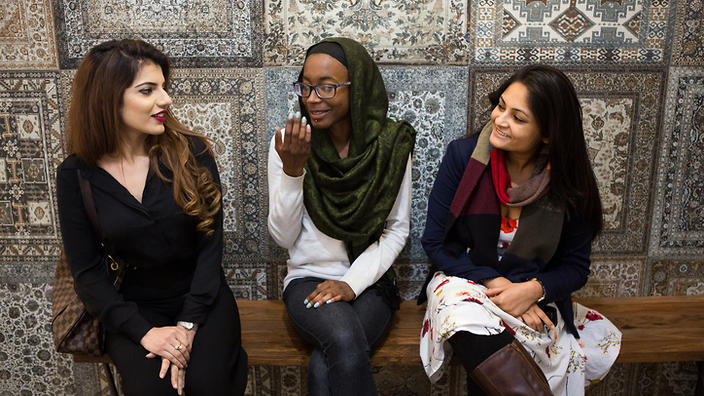 My mother grew up in Kharadar. It’s an old inner-city working class area in Karachi, Pakistan. It’s where the late great Pakistani philanthropist Abdul Sattar Edhi started his global charity - picking up bodies of drug addicts and serving the homeless to alleviate the city’s Dickensian poverty.

It’s a place where pollution strangles your lungs, where electricity and water fail regularly and the lack of sewerage facilities and guttering mean the unpaved rocky streets get flooded in the rains.

My mother’s family was very poor. My grandfather was a gambling man, so there was no money. My mother said she’d often sell foodstuffs and trinkets on the street to help out. She’d also carry water to their home from a nearby public tap.

I remember her once telling me when she was a child, she was thrown out of school because her uniform wasn’t clean enough. Teachers didn’t really care about girl children. No one did.

The burning rage of that experience still lives with her. The fact she was denied literacy - and the power and knowledge that comes with that- is something she’s always felt very keenly. Coming to Australia she experienced a double dislocation - without English, more powerlessness. It was another way you were unable to navigate the world around you - another way for people to make you feel irrelevant. Another way for systems of bureaucracy and knowledge to be impenetrable to you - to exclude you.

Despite this, she’s the most savvy person I know. One the best communicators and hustlers. Someone who knows a thousand people and can find a thousand ways to get what she needs. She’s someone who can recite from memory dozens of numbers and addresses.

She’s a master people person. Everything I’ve learnt about people skills and building relationships and persistence and resilience, I’ve inherited from her. But her lack of formal education has always gnawed at her - another way people made you feel inferior. Everything I do as a journalist is mediated by this desire to traverse and translate worlds, to make things meaningful to audiences, to expose them to unfamiliar realities. To make them feel what it’s like to be hemmed in by crushing social forces like class and race and gender - to try and change things for people who don’t have the words.

People who are trapped by the prisons of poverty and patriarchy and authoritarianism and ‘illegality’.

People who have been denied power, deliberately.

I’m here to talk about the power of words and ideas and telling our own stories.

The women here - activists, artists, academics, politicians - are the cream of the crop. I’m so pleased to be in this room of fierce minds discussing the challenges of women’s rights in Muslim communities today, and the added layers of racism and migration Muslim women of colour in the West navigate.

We live in difficult times and the solidarity and respect I feel for some of the people in this room is immeasurable. It’s been such a boon to just know people like you exist and care and are angry and see what is wrong and are working to fix it.

You have the ideas. You are creating the paradigms that will help bring justice to people like my mother. People who suffer because they don’t have the words and the power to fight back.

People who think what the Maulana says or the TV evangelist says is true - that religion is obedience, religion is accepting your husband’s advances even if you don’t want to because the angels will curse you till dawn, people who say it’s ok to discipline your wife if she’s ‘nushuz’ - after all you’re only hitting her with a toothbrush!

People who say 'be patient sister, you can’t get a divorce' and you can’t do anything without a male guardian - a mahram or wali. My mother says she still remember the women who would sit on the doorstop of their houses in Karachi in the dark after their husband had given them a triple Talaq because they had nowhere else to go.

There are the people who enforce female subservience and misery. People who say religion is having faith and ignoring mental health problems. People who say you’re half a person with half rights to inheritance. People who say get married even if you love someone of the same sex and suffocate yourself. People who make God an enforcer of male interests, not a force you could go to heal your broken heart from all this hurt.

People who make God an enforcer of male interests, not a force you could go to heal your broken heart from all this hurt.

There are serious problems in our communities - problems often exacerbated by traditional understandings of faith that are deeply harmful. Everyday patriarchy also infuses all aspects of our culture - so many young women I talk to struggle with independence and non-conformity in communities still deeply averse to female autonomy.

It means so many women don't even try to follow their dreams because they know they will subject to so much scrutiny. It’s crushing for their self-esteem, for risk, for the imagination, for the fulfilment and expression of one’s potential.

We all know making big mistakes is part of big wins and growth. But when you can’t place a foot wrong - when you have to be careful and cautious and low key and perfect and measured always - it makes for a bland world. So many are escaping the rigidity and leaving.

But leaving into what? On the other end of the spectrum, a depressing feature of the contemporary Australian political and media sphere has been the surprising vitriol and attention directed towards high profile minority voices, particularly Muslim women.

This hostility has worked as a depressing silencer for quality intellectual voices.

This compounds the difficulties faced by women in closed communities, coming up against patriarchal social norms and religious authority.

For those caught within the fault lines of these fractures, it’s easier to stay low, in the margins of nowhere.

It means disempowered women within minority Muslim communities literally have no safe space.

As a journalist of Muslim background, there is a continuing question I face in balancing the need to pursue women’s justice stories with the rising Islamophobia in the wider society and worldwide.

This sentiment is mirrored in other western jurisdictions with the rise of far right political groups on anti-Muslim platforms. It’s led to a climate where stories of friends harassed, subject to surveillance and suffering suspicion and discrimination at work and in society are routine.

The urgency of this has contributed to an ethos of tactical delay when it comes to women’s issues. Muslim women heavily invested in racial justice struggles do not find support for their own challenges in community reciprocated. The time is never right to address the concerns of women.

The time is never right to address the concerns of women.

All of the above inhibitors to public engagement provides a free pass for the status quo. It results in an impoverished public conversation that never moves beyond demonisation or its flip side ‘breaking stereotypes’. It means nothing changes.

We lose important voices of expertise in a one-sided conversation.

We lose the opportunity to serve and hear the complex stories of those struggling against intersecting oppressions and social inequality.

We lose consideration of the political, social, cultural and racial differences and diversity of multi-layered communities, flattened by simplistic slogans and reactionary defensive posturing.

It leaves the field open for tabloid treatment of issues, without the respect and complexity they deserve.

It also means a bland and homogenous landscape that does not reflect Australian society.

A landscape where minority communities do not have the right to participate in conversations important to further growth, healing, awareness and redress.

It’s crucial to create positive links between activists and journalists on the ground and the important scholarly work of feminist Muslim Women, and make this work accessible to everyday people through the media.

Furthering the public conversation is an important way to create social change.

Crucial to this is recognising and building solidarity within the diversity of women here today.

We might not all agree but it’s incredibly important that we take charge in leading the conversation, and supporting those who come up again and again against the blunt force of those who want to stifle social change.

James Baldwin once said ‘Your crown is already bought and paid for’.

I know it’s really hard to speak out. I know some of you here have experienced death threats and vicious trolling. Things no person should have to deal with. The hostility. The lack of nuance. The ignorance. Even from so-called feminist quarters. But you can’t complain about the lack of representation or the level of conversation if you’re not actively involved in creating a better one.

You can’t complain about the lack of representation or the level of conversation if you’re not actively involved in creating a better one.

Our crown has been bought by people like my mother and the generations before her, who didn’t even get the chance.

We just have to have the courage to wear it. It is through their hard work and sacrifice and prayers and hopes and crushed dreams - that we exist here today with what we have.