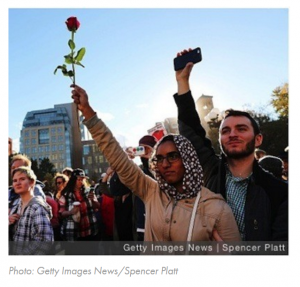 The day after the 2016 elections, I was like many people in the United States—devastated. That feeling didn’t last long, as I quickly became outraged. How could this have happened? How could we have allowed hate, racism, sexism, divisiveness to win? Then I realized that what I have been fighting against as an organizer for the past 15 years had bubbled to the surface, and now we were face to face with the ugly truths that have always existed in our country. All of a sudden I felt more emboldened and committed to activism work and to the communities I organize with more than ever. Just two days after the election, I saw an events page on Facebook about a women’s march, and it piqued my interest. I read the description and I commented randomly on the page, “This is a great effort, I hope that you can center Muslim women and their communities.” The comment went viral, and the next day I was contacted by march organizers and two women of color who were already involved, Tamika Mallory and Carmen Perez—two dear friends of mine with whom I have worked closely on criminal justice reform and police accountability.

I agreed to participate in what became known as the Women’s March on Washington as one of four national co-chairs with conditions—that we center the most marginalized voices that were the targets of the political rhetoric of this incoming administration. Organizers were already on the same page. We agreed that this is a women-led march focused on the idea that women’s rights are human rights—but we wanted to push that further: that women are intersectional human beings who live multi-issued lives. When we are protected, when we are respected, when we are able to thrive and given the same opportunities as our male counterparts, when we are given space to lead and rise—our nation will rise.

#WhyIMarch—it's because I love my community. I joined as a national co-chair of the Women's March on Washington to center my Muslim community, who has suffered in silence in a post-9/11 America. Plagued by policies that have stripped us of our civil liberties in the name of national security and swept up and detained our fathers, husbands, brothers, and sisters without due process, stripped us of family members because of an unjust immigration system. They registered our men. They put us in databases: terror watch lists, suspected terror watch lists, no-fly lists. They continue to wholesale spy on our community, leaving no place of sanctuary. A majority of Americans stood by idly, either because they didn't know or because it wasn't impacting them directly or because they believed the hype, that my community was suspect, we were not to be trusted. We were not “one of them."

I joined the Women's March on Washington because that will be no more. We will center those who have been the most marginalized and targeted. We will send many messages, and one will be "Hands off our Muslim sisters and brothers. They are of us, have always been of us, and we will protect and stand up for them. No more silence. We are awake now." They can't and will not ignore us.

We will stand proud in support of women’s reproductive rights, immigrant rights, climate justice, and in support of full and equal rights for African Americans, people with disabilities, and LGBTQIA communities. We will send a strong and powerful message that the way we choose to fight injustice is not with injustice—it is together, in unity, standing side by side. We know that the only way to win is to bring all the social justice movements together. If we live multi-issued lives, how can we be organizing on important issues separately? Intersectional organizing is the agenda moving forward. We will win together.

The Women’s March on Washington is poised to be the largest mass mobilization that any new administration has ever seen on its first day. If there was ever a time to stand together, to stand proud and loud, it’s under a president who won an election on a message of hate and division. The march is not the beginning, nor is it the end. It builds on decades of work by brilliant and committed advocates and organizers. The march is only a continuation of that work and a stepping stone into an era of resistance to an administration that has sent a loud and clear message through its appointments and its agenda that it does not care about our issues or our communities. We hope to inspire hundreds of thousands of attendees and those who will watch at home to organize on a local level in their neighborhoods, towns, and cities. We hope the spirit of the march is rooted in a sense of urgency and will resonate and move people towards action.

It took a moment like this to wake people up—but they are wide awake now, and they are ready. Generations from now, little girls and boys will hold their chests out with pride reading about the leadership of women who united a divided nation—so come, be a part of history. Let's continue to build on the legacy of those before us. Walk with me. March with me. 1.21.17.

The views expressed in this commentary are those of the author alone and do not represent WMC. WMC is a 501(c)(3) organization and does not endorse candidates.

To support women journalists who are changing the conversation, donate to the WMC here. To read other recent WMC Features, click here. 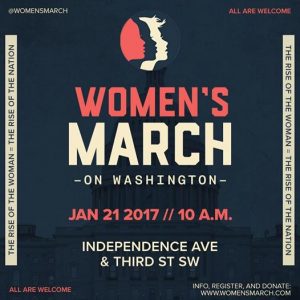