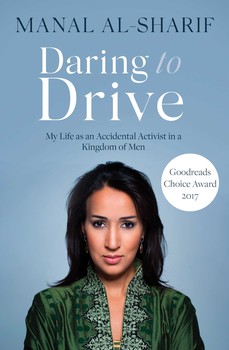 When I first saw the book 'Daring to Drive: My Life as an Accidental Activist in a Kingdom of Men' by Manal Al-Sharif at a bookstore, I brushed it off as just another book about women living in the kingdom of Saudi Arabia.

You have probably seen those ‘typical’ books. They are about this Saudi princess, or that American expat wife, all trapped under the kingdom's strict patriarchal rules.

Those books usually portray the lives of women in a very dramatic way:  These women are usually isolated and cocooned at home unless they have the permission of their male guardians to go out, and are largely unable to freely participate in a bunch of activities such as do sports or mix with the opposite gender. They are treated like little children, unable to exercise agency and autonomy.

These limitations imposed on Saudi women are very real and true. However, it is also undeniable that these kind of books pander mostly to the gaze and pity of the Western audience.

Firstly, there’s the cover of these books: typically, it shows a woman wearing a burqa with only the slit of her eyes showing. The plot is usually maudlin: the female protagonist is usually so victimised and she can only be rescued by the sympathy and benevolence of a Western person.

The book is Al-Sharif’s memoir of starting the ‘Women2Drive’ campaign in 2011 which eventually led to the lifting of the country’s driving ban on women.

The book begins with the secret police coming to her home in May 2011. That previous afternoon, Al-Sharif was stopped while driving her brother’s car. Her violation? Driving while female.

Al-Sharif then takes the readers on a journey of what led to her arrest.

Al-Sharif was born in Mecca - dubbed Islam’s holiest site – to a poor working class and religiously conservative family. Growing up, Al-Sharif was influenced by Wahabbism, a fanatical strand of Islam. She once chucked her brother’s boyband CDs into the oven, fearing that pop music was haram. In her youth, she also devoted her time to reading misleading conservative religious literature.

As a child, she was physically abused by her parents, particularly her father. However, this only strengthened her sense of justice and moral compass.

Furthermore, Al-Sharif has an intelligent mind and as she matured, developed a deep curiosity to find out herself to what is true and what is false in Islam.

Furthermore, encouraged by her mother, Al-Sharif often came on top of her classes since young. She graduated from King Abdulaziz University and eventually became a computer scientist with the petroleum company Saudi Aramco – one of a very few Saudi women to work there. It was at Saudi Aramco that Al-Sharif learned to drive.

In 2011, together with a group of other Saudi women, Al-Sharif, then 32, started a Facebook campaign called ‘Women2Drive’ calling for Saudi women to drive starting 17 June of that year. The initiative garnered 12, 000 people expressing their support on Facebook, and attracted the help of fellow Saudi women’s right’s activist Wajeha al-Huwaider.

In May 2011, Al-Sharif drove a car in Khobar, with al-Huwaider filming.  In the video, Al-Sharif was filmed saying: “This is a volunteer campaign to help the girls of this country to learn to drive at least for times of emergency, God forbid. What if whoever is driving them gets a heart attack?" In just a few days, the video attracted around 600, 000 views.

She was detained in prison for a few days, and was granted freedom after a letter requesting clemency was submitted to King Abdullah.

In June 24, 2018, after a long and arduous activism by Al-Sharif and fellow women activists, the ban on women’s driving was finally lifted.

The state of women’s rights in Saudi Arabia now

Despite making some progress in gender equality, such as the removal of the driving ban for women and the introduction of the freedom for them to vote, Saudi Arabia remains, arguably, one of the most repressive countries for women.

Critics argue that most of these rights are mere lip-service. Recently, Saudi woman Rahaf Mohammed al-Qunun, 18, attracted global attention when she escaped to Thailand during a family vacation in Kuwait, in a bid to reach Australia and seek asylum there. She listed mental and physical torture by her family and also said she wanted freedom from the kingdom’s repressive rules against women.

And according to the Gender Gap report by the World Economic Forum, Saudi Arabia ranks as one of the lowest countries when it comes to gender equality.

After she was released, Al-Sharif garnered admiration locally and abroad.

However, she also attracted backlash from some in her community. In 1990, a group of women had driven cars in protest of the ban, but were imprisoned and their initiative squashed. Some activists, including women themselves, feared that Al-Sharif’s call for the lifting of the ban would deflect attention from what they perceive as more urgent issues surrounding Saudi women.

Al-Sharif also received flak from her employers at Saudi Aramco.

Al-Sharif has since left Saudi Arabia and now lives in Sydney, Australia. Her efforts have been highlighted by international media, including Foreign Policy magazine and Forbes magazine who listed her as one of the most influential people in the world. She is now a well-sought-after speaker on women’s rights.

Mohani Niza is a writer with Muslim World Today. She can be contacted at [email protected]