By Alia Rajai for Global Citizen 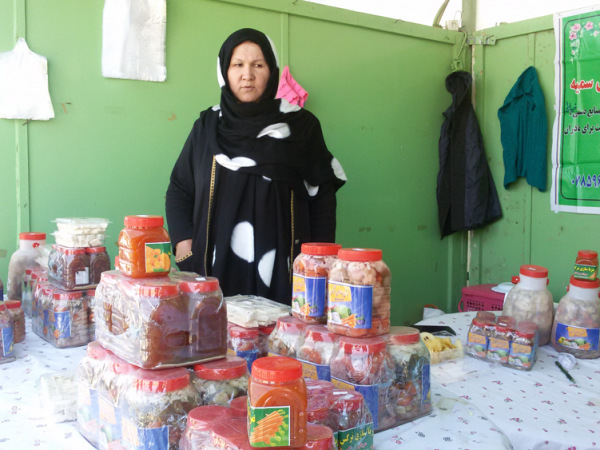 Masooma Akbari, a former refugee, started her small business 11 years ago when she returned to Kabul from Iran.

She and her family -- a husband and five children -- wanted to settle back down in their homeland and were hoping to benefit from the removal of the Taliban. Her husband was unable to find a good job, so she began hawking her homemade wares. She is now her family’s breadwinner, and works with her daughter and daughter-in-law to sell homemade products to shops around Kabul.

“My first customers were our neighbors,” Akbari, 45, told me as she operated her booth at Kabul’s annual agricultural exhibition.

Around 100 people milled around the booths, talking to the vendors. It was very busy, just like last year, but I saw a change: there many more women participating. I quickly noticed a large group standing in front of one woman’s booth. I was impressed by her confidence, and how she expertly sold her products to customers, promoting her jams, yogurt and pickled vegetables as healthy and homemade.

In ultra-conservative Afghanistan, women are rarely seen in business, and many face obstacles and social pressures. For Akbari, the battle is worth it. “I get depressed when I’m not working,” she said.

During the brutal regime of the Taliban, women were banned from working or studying. Even venturing outside of the house required they wear the head-to-toe burqa. Today, fifteen years after the Taliban was ousted by U.S.-backed Afghan forces, change is finally taking hold. Women like Akbari are becoming breadwinners. At the agricultural exhibition, many women worked shoulder to shoulder with the men.

According to the government-run Afghanistan Investment Support Agency, there are currently 1,413 women registered as business owners in Afghanistan. This compares to some 12,000 Afghan men, said Ghulam Nabi Khalili, AISA’s director of investment support.

These numbers do not take into account the hundreds of female breadwinners who are not registered – war and a weak economy mean many small and informal businesses work under the radar. There are many reasons why Afghan women choose to go into business in such a male-dominated culture: some have been widowed, while others have husbands who are handicapped, addicted to opium or simply cannot find work. In a country still considered one of the worst places on earth to be a woman, female breadwinners are important role models. They can also benefit the entire family, decreasing the societal pressure heaped on men to provide.

But the challenges of a strict patriarchal society are never far away. Even Akbari, whose husband takes pride in the work she does, does not have his permission to travel on her own. “He wouldn’t let me go to India for an agricultural exhibition,” she said with frustration.

Security poses a deep problem for women, who often face harassment and more danger than men on the streets. “By working they face a lot of threats,” said human rights activist Shahba Shahrukhi. Within the world of business, some women are sabotaged, prevented and humiliated. “One day I heard a man tell another, ‘what are women doing here?’” recalled Khadija Hussaini, the owner of a dried fruit and nut company called Nejat.

Since founding Nejat three years ago, Hussaini now employs up to 70 women each season, and sells abroad. Her inventory contains a vast array of colorful foods, including pistachios, pine nuts, apricots, Japanese silverberry, walnuts and dried mulberries. “Often I employ women who are widowed or illiterate,” she told me in her home over steaming mugs of black tea.

But succeeding in male-dominated Afghanistan is no mean feat. “I face constant problems,” she said, pouring dried green raisins into large plastic bags for sale.

The government provides some support to women in business, such as gender-specific training both in and out of the country. The Afghanistan Chamber of Commerce and Industries also provides contractual advice, support finding donors and benefits from zero export tariffs, said international affairs manager Hashim Rasuli.

Some women have even started to teach others the tricks of their trade. After buying her delicious yogurts, Akbari’s female neighbors asked her for lessons. She estimates that she has taught around 40 women, and some of these have gone on to establish their own businesses. Security permitting, Akbari now wants to expand her business and sell beyond Kabul in the provinces, where the government has less control over the militants.

“Half of modern society are women,” Hussaini said with great pride, adding that the threats she receives pale in comparison to her sense of accomplishment and the good income she provides for her family. Her hard work has won her business awards in India and at home. “If we can stand on our own two feet and have independence, this is the most valuable and important achievement.”