During the Olympics female runners had the luxury of running outdoors. (Robert F. Bukaty/Associated Press)

Separate but not equal isn’t the tagline of this weekend’s upcoming marathon in Tehran, but it could be. On Wednesday, race organizers confirmed to the Associated Press that while the men get to enjoy an outdoor course Friday, the country’s strict laws are forcing female participants to run the roughly 26-mile race on an indoor track.

“Personally I do not agree with that,” Dutchman Sebastiaan Straten, who is helping to organize what’s being billed as Iran’s first international marathon, told the AP. “We are trying to find other ways to make step for female running in Iran.”

The laws which require men and women to compete apart from each other stem from the country’s 1979 revolution that goes so far as to even ban women from watching men’s sporting events in person and vice versa. Iran also requires women to wear Islamic headscarves and be covered save for their face, hands and feet.

Women, despite competing separately from men, will still be required to uphold those strict wardrobe rules during the run, the marathon’s website states. Men, meanwhile, can wear standard running gear, including shorts that go well above the knee and tank tops.

At times the country has shown itself to be so strict regarding its wardrobe rules that its reached its arm well beyond its borders. In February, the country’s chess federation kicked teenage chess prodigy Dorsa Derakhshani off the national team for competing without a hijab at the Gibraltar Chess Festival

“Unfortunately, what shouldn’t have happened has happened,” Pahlevanzadeh told the Iran’s semiofficial Fars News Agency at the time (via Radio Free Europe). “Our national interests have priority over everything.”

While more Iranian women in the world of sports and games are joining the fight for equal rights — and their efforts have made some progress — TehRUN has failed to attract as many female as male entrants, according to the AP.

Of the 600 Iranian runners who have registered for the race, only 156 are women.

Meanwhile, the AP reports “at least 160 foreign runners” have also agreed to participate, including 50 women.

It’s unclear if any Americans will participate in the race, which requires its international entrants to obtain a visa. When speaking with reporters on Wednesday the head of Iran’s track and field federation, Majid Keyhani, hinted that some runners may have trouble getting their visas by Friday. The process for Americans could prove even more difficult after President Trump kept Iran to his revised executive order calling for a travel ban on six majority-Muslim countries last month.

“We have sent all runner names to Iran’s Foreign Ministry for issuing visas,” he said (via the AP), but added the process may “take time.”

Keyhani added that no professional runners have registered for what he called a “Persian run” instead of a marathon because the race falls just about a 10th of a mile short of the 26.2 miles required for an official marathon.

Despite the problems, organizers remain upbeat that the run will be a success.

“We want to show everybody that Iran is a partner in making bridges, not walls,” Tehran-based organizer Maryam Feize told Al Jazeera last week.

The organizers of TehRUN previously organized a race in the southern Iranian city of Shiraz last April that it considered a success. While that race banned women altogether, two female runners decided to run anyway to protest. Masoumeh Torabi and Elham Manoocheri both avoided arrest for their participation, as well as accolades from Straten at the time. 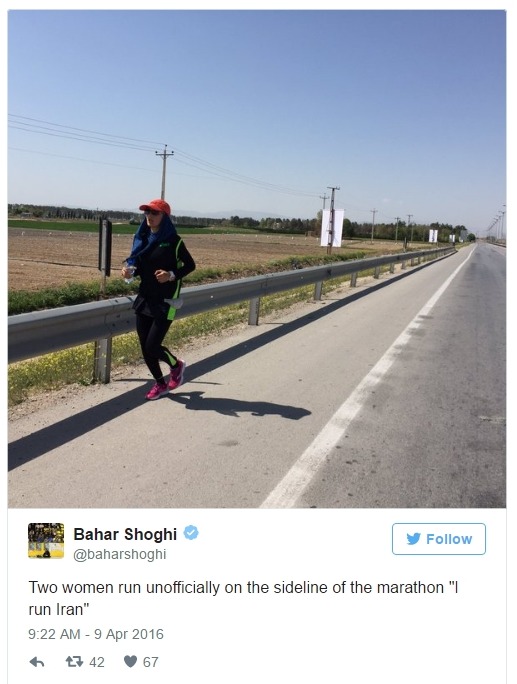 “Both have shown and proven that Iranian women can run in Iran,” he told Runners World last year. “We hope many Iranian women will follow in their footsteps in next editions!”