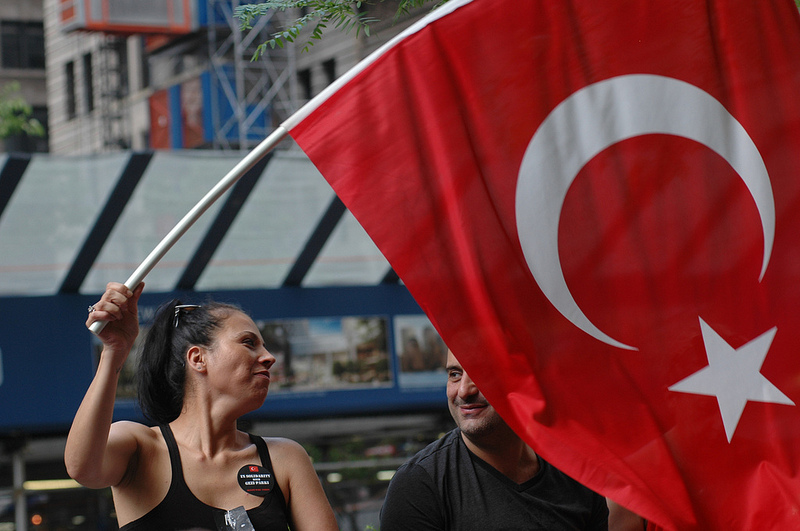 I truly admire Elizabeth Warren for showing the importance of politically active women. Politics is an important mechanism to empower women: a tool to change their lives, especially in Turkey. We need more women in politics to initiate change, regardless of their ideological standpoint. Warren is cynical, sincere, and direct in her speech – more than any woman politician in Turkey could ever dare to imagine being. She also deserves our respect for playing the game of politics according to the rules, despite the obstacles a woman encounters in politics, and for waiting for the perfect timing to move forward. It was quite easy to predict that she would be an important political figure in the near future.

Women politicians face severe obstacles in Turkey: the challenges of struggle, the near-impossibility of ‘feminizing’ a state, which has been definitively male since the beginning of the new Turkish Republic. Politics has always been taboo for women, and not just in the early days of the Republic. Women, as the bright face (and the PR tool) of the new Republic could not enjoy the freedom that they were promised.

From a distance, they seemed to have had all the advantages that a new democratic regime could possibly offer. However, behind the curtains, things were very different.  The early Republic was probably one of the most politically active periods of the women’s movement in Turkey. Even back then, the most committed secularists; famous scholars and progressive democrats who were the founders of ‘Modern Turkey’ did not do much to help the rise of the women’s movement. On the contrary, they seemed quite satisfied to exclude women from the political arena. Probably the most significant figure of the time was Yunus Nadi Abalıoğlu, the founder of the first secular newspaper, and the greatest supporter of Atatürk, the founder of the Turkish Republic. It is instructive to analyse his published articles in that period in order to understand the general perception against women in general, and Nezihe Muhiddin, one of the leaders of the women’s movement, in particular. He had no qualms about writing articles disparaging the grassroots movement that women were building, despite championing the democratic system, and the importance of freedom. This was a paradox he failed to notice throughout his life. The women’s movement was soon to be seen as a threat to the fledgling Turkish Republic, in which women were expected to be the symbol for democracy, but no more than that. They were given the right to elect, but not to be elected.

We see similar dynamics under the 17 year rule of Erdoğan’s AKP, which used women as a symbol for conservatism. For the past seventeen years, the conservative AKP have used women as symbols and propaganda tools. Women are the easiest way to show their ideal conservative lifestyle, crowned with a new political language: misogyny.

Thus the leaders of the ruling party were more than willing to target women protesting on the streets. The former Prime Minister questioned the virginity of a young women protestor saying: ‘Is she a woman or a girl? I don’t even know!’ 1. An AKP minister casually criticized a woman reporter and told her that, ‘A woman should not laugh out loud in public places’. This misogynistic language used by the government filters into everyday speech. The president of one of the leading soccer clubs faced a huge protest when he said, ‘We will die as men: it is shameful to live like women’.

Strangely enough, both parties have neglected the rise of countless women’s rights organizations established in the past five years: the formation of a new civil opposition movement. The nationwide referendum in April 2017, which was about increasing the powers of the President, opened a new path for women’s organizations to show their dynamism. In many respects, the energy shown through the challenges and protests against the expansion of Erdogan’s power came from feminist groups, not from the opposition. Strangely enough, these women’s organizations were able to achieve many things that the mainstream political parties had failed to do, such as build unity. Socialist feminist groups walked hand in hand with nationalist women in the protests, despite their ideological differences. Conservative women’s organizations attended the demonstrations for LGBT rights. Turkey witnessed a march of hundreds of thousands of women on March 8, despite increasing restrictions on freedom of expression and assembly in Turkey.

As it is now, women in Turkey can only raise their voices in the streets. But we need to be heard in government as well.  Turkish women understand the urgent need for more women in politics only too well. As Elizabeth Warren says, ‘If you’re not on the table, you’re just an item in the menu.’