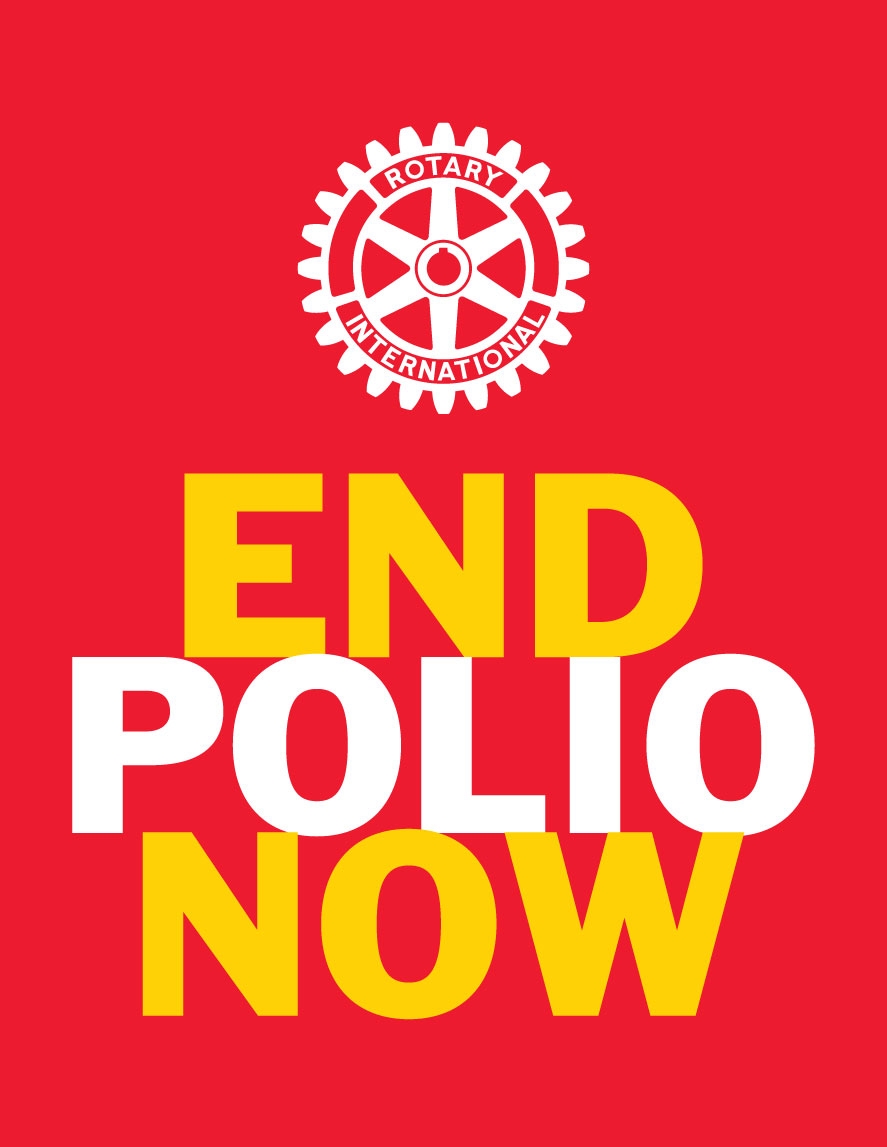 It is a rare moment in history that mankind is so close to eradicate yet another disease from the planet earth for ever. It is really spectacular to be so near.

The story of polio is a simple one. After years of fear, misery, pain and fear, a vaccine was developed and a disease was conquered. But for many countries the story was different as the vaccine was not available: mass vaccines were too expensive and children couldn’t be. That was until Rotary stepped forward and said that all children no matter where they lived or what their circumstances deserved to live free of polio.

October 24 is the world Polio Day. It is a day to celebrate and observe how far we have come and an opportunity to raise awareness and funds to complete the work of eradication.

Polio (Poliomyelitis) is a highly infectious, paralyzing and potentially fetal disease that most commonly affects children under the age of five. There are three types of polio virus and many strains of each virus.

The virus enters through the mouth and multiplies in the throat and gastrointestinal tract then moves into the blood stream and is carried into the nervous system where it replicates and destroys the motor neuron cells. Motor neuron cells control our muscles for swallowing, circulation, respiration and the trunk, arms, legs. This virus can cause paralyzes with in matter if hours, but completely vaccine- preventable.

The initial symptoms of polio include fever, fatigue, headache, vomiting, and stiffness in the neck and pain in the limbs. In a small portion of cases, the disease can cause paralysis which is of permanent. There is no cure for polio and can be prevented by immunizations. Polio is a disease which is endemic in only three countries but unless we reach every child with the vaccine, no child anywhere is safe.

In 1985, Rotary launched its PolioPlus program. It was the first initiative to tackle global eradication through the mass vaccination of children. Rotary has contributed more than $1.6 billion and countless volunteer hours to immunize more than 2.5 billion children in 122 countries and territories. Rotary's advocacy efforts have played a role in decisions by donor governments to contribute more than $7.2 billion to the effort.

Global Polio Eradication Initiative was formed in 1988 which is a public private partnership and includes WHO, UNICEF, US CDC and Prevention, Bill and Melinda Gates Foundation and the governments of the world. Rotary's focus is advocacy, fundraising, recruitment and awareness building.

Children who are vitamin-A-deficient are at a higher risk even after repeated immunizations. Children who are poor, hungry and living in remote areas are most likely to be visited by pneumonia and diarrhea, which are the forgotten killers thus negating the oral polio vaccine. Challenges include geographical isolation, armed conflict, cultural barriers and poor public infrastructure.

Every dollar Rotary commits to polio eradication will be matched 2 to 1 by Bill and Melinda Gates Foundation for up to $50 million a year up to 2018. These funds provide much needed operational support, medical equipment, medical personnel and educational material for both health workers and parents. Governments, individuals and corporations play a crucial role in funding.

More than a million Rotarians have donated their time and resources to end polio. Every year Rotarians work side by side with health workers to vaccinate children in polio-affected countries. Rotarians also support in recruiting volunteers, assist with transporting the vaccine and also provide other logistic support.

The World’s Greatest Meal program was started by Australian Rotarians on 25 December 2013. Rotarians and friends get together over meals and/or skip a meal and donate towards this cause by registering an event at www.wgmeal.com and post results afterwards with short messages and photographs.  As of 19th October, there have been 5026 events registered in 80 countries with around 302,700 participants worldwide raising more than $3 million through WGM. This have been matched by Bill and Melinda Gates Foundation to make it $9 million.

The fight to end polio is led by the Global Eradication Initiatives (GPEI) which includes Rotary, UNICEF, the VS centers for disease control and prevention (CDC), the World Health Organization (WHO), the Bill & Melinda Gates Foundation and governments of the world, with the support of many others around the globe.

Rotary uses the skills and passion of its members to build awareness, fundraise and encourage governments to donate to and support polio eradication efforts. Over 1 million members have volunteered their time and resources to help end polio.

The role of the Bill & Melinda Gates Foundation

The Bill & Melinda Gate foundation is the largest private funding source of the GPEI and matches all donations to Rotary for Polio 2 to 1, up to $35 million per year. It also provides technical support and invests in research to enhance polio vaccines, surveillance, and outreach response.

The CDC provides epidemiologists, public health experts, and scientist to investigate on breaks of Polio, identify the strains of polio and its geographic region.

UNICEF buys polio vaccines and manages its distributions. The agency spreads the word about the benefits of vaccination to gain community acceptance. On the ground, the field workers immunize children with the help of local health workers and volunteers.

WHO coordinates the management and administration of the GPEI and provides technical and operational support to ministries of health around the world. WHO is also responsible for monitoring our progress and strategies planning.

1894  The first major documented polio outbreak in USA occurs in Vermont; 18 deaths and 132 cases of permanent paralysis are reported.

1905  Swedish physician Ivar Wickman suggests that polio is confessions disease that can spread from one person to another and also suggested that polio could be present in people who show no symptoms.

1908  Two physicians in Vienna, Karl Landsteiner and Ervin Popper, discover that polio is caused by a virus. A major polio outbreak in New York City kills more than 2000 people. Across the United States, polio takes the lives of about 6000 people and paralyzes thousands more.

1955   A vaccine developed by Dr. Jonas Salk is declared “Safe and Effective”

1979   Rotary International begins its fight against Polio with a multilayer project to immunize 6 million children in the Philippines.

1985  Rotary International launches PolioPlus, the first and largest internationally-coordinated private sector support of a public health initiative with an initial fundraising target of US$120 million.

1988  Rotary International and the World Health Organization launch the Global Polio Eradication initiative. There are an estimated 350,000 Polio cases in 125 countries.

1994  The International Commission for the Certification of Poliomyelitis Eradication announces that polio has been eliminated from America.

2006  The member of Polio-endemic countries drops to 4: Afghanistan, Indian, Nigeria and Pakistan.

2009  Rotary’s overall contribution to the eradication effort nears US$800 million. In January, the Bill and Melinda Gates Foundation pledged US355 million and issues Rotary a challenge Grant of US$200 million. This amount will result in a combined US$555 million in support of Global Polio Eradication initiative.

2012  India surpasses 1 year without a recorded case of polio and is taken off the polio-endemic list. Only three countries remain polio-endemic. Rotary surpasses its US$200 Million challenge fund raising goal more than 5 months earlier than planned.

2014  India goes 3 full years without a new case caused by the wild Polio virus. WHO certifies the Southeast Asia region polio-free. Polo cases are down over 99% since 1988.

Salman Mubarak joined Rotary in 1999 and is a charter President of the Rotary Club of Multan Cantt (Chartered in 2001).