By JOHN ORTVED for NYTimes

A few years ago, things weren’t going so well for Yahya Abdul-Mateen II. Even with an architecture degree from the University of California, Berkeley, he found himself laid off and out of luck. Rather than look for another job in the fields of housing or public policy, where he had planned a career, he decided to take a risk.

“Acting was always in the back of my head,” Mr. Abdul-Mateen said.

So he left the Bay Area for Los Angeles with the notion that if he could somehow get cast in a McDonald’s commercial, he might end up with a bit part in a soap opera, which could lead to a role on a bigger network show. “I made a plan: If I hadn’t done anything in three years, I was going to say, ‘O.K., back to a job in an architecture firm or public policy,’” he said.

In Los Angeles, he auditioned for an educational theater group, only to be told he was too old. But the instructor’s husband was casting a small production of “Twelfth Night,” and soon Mr. Abdul-Mateen found himself playing Antonio.

“Someone in the cast was applying to graduate drama school, and I said, ‘You can do that?’” he said. “I Googled the top programs in the country. I prepped for about seven months, doing auditions in my living room, talking to the wall.”

He ended up at the Yale School of Drama, an incubator for stars like Meryl Streep and Lupita Nyong’o. In the summers, he got more stage time at the Williamstown Theater Festival in Williamstown, Mass., and with Shakespeare in the Park in New York City.

Now, at 29, Mr. Abdul-Mateen has a key role in a big-budget Netflix production, “The Get Down,” from the over-the-top Australian auteur Baz Luhrmann. The show is set in the 1970s music scene of New York. Mr. Abdul-Mateen plays an underworld figure named Cadillac, whom he described as a “disco prince.”

With its focus on nascent hip-hop, punk and disco, “The Get Down,” which starts streaming Aug. 12, may strike viewers and critics as a corrective, of sorts, to another show set in 1970s New York, HBO’s recently canceled “Vinyl,” which accounted for the birth of hip-hop but leaned more toward rock ’n’ roll. 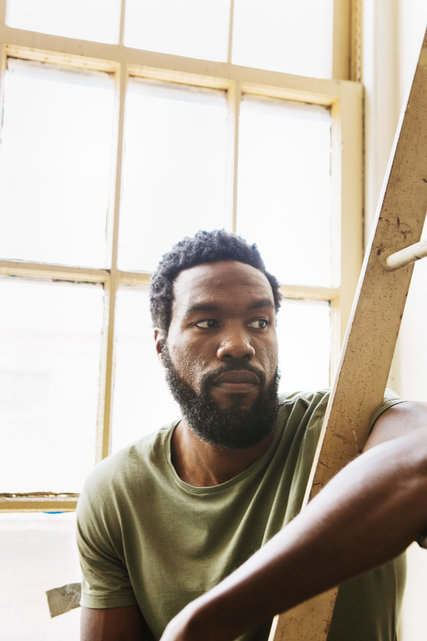 To prepare for his role, Mr. Abdul-Mateen worked on his moves four to seven hours a day. “Before this, I was not a dancer,” he said. “I knew when the music comes on, you move to it. I’m from New Orleans, so I like second line. But I thought I was more coordinated than I turned out to be.”

After spending his early childhood in the Magnolia housing projects, he moved to Oakland. “But New Orleans is one of those places that doesn’t leave the house,” he said.

“They’re from the Bay Area,” Mr. Abdul-Mateen said. “I heard one of them say a phrase that was specific to there — ‘Yadadamean’ — and we hit it off really quickly.” (The word is slang for “Do you know what I mean?”)

A sense of authenticity will be crucial to the show’s success. Those familiar with its setting are likely to watch closely, given that its Australian creator’s background is so different from those of the characters on screen. Mr. Luhrmann brought aboard Grandmaster Flash and Kurtis Blow to school the cast members and keep the look and atmosphere correct.

“He doesn’t claim to be an expert,” Mr. Abdul-Mateen said of Mr. Luhrmann.

The actor has come to appreciate his character’s vintage style. “You notice how much self-expression is really embedded in the fashion,” he said. “Men wearing their shirts down with their chests open. You got black people wearing huge Afros, wearing gold, walking tall and strutting and saying, ‘How you doing, Brother?’ It was a time to be proud of who you were.”

A typical workday in the dance studio began with hamstring stretches, many of them the same as the ones Mr. Abdul-Mateen did when he ran track at Berkeley. The key for era-appropriate dancing, he learned, is the hips.

“Very important,” he said. “Men in the ’70s communicated with their hips much more than they do now.”