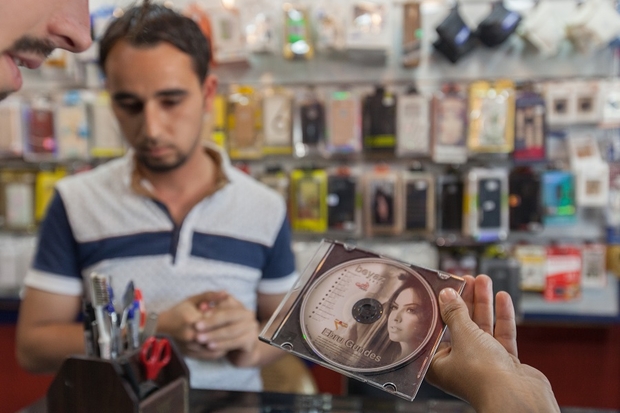 A customer holds a CD in the music shop run by Abdulrahman Sabah (background) in a bazaar on the shopping street of Nabi Younis, on the eastern side of Mosul, 22 April 2017 (MEE/Sebastien Castelier)

Strictly forbidden under the reign of the Islamic State group in Mosul, the streets of the city are now alive again with music

Music is booming out from the cars and taxis zipping around east Mosul, while pedestrians lip-sync and shake their heads to the rhythms emanating from their ipods and phones. Once banned under the Islamic State (IS) group, music is now back in town.

After being shut down for months, small stores selling CDs have re-opened their doors to loyal customers.

"Do you want me, do you need me, right now!" exclaim the singers in the song Right Now, by Indian actors Akshay Kumar and John Abraham, whose song is playing on a stereo in a shop in eastern Mosul. The small store, run by Abdulrahman Sabah, 23, sells CDs to shoppers that still prefer the old-fashioned way of listening to music.

Turkish, Persian, Arabic, and some Western music CDs are on display on wooden shelves. And for enthusiasts of Kazem al-Saher, one of Iraq's most famous singers, his CDs are also back in stock.

"I re-opened my store a few weeks ago. After the arrival of the Islamic State, I had been forced to close my store, so I am happy to be back," said Abdul Wahab Ahmar with an awkward smile, who is a colleague of Sabah. 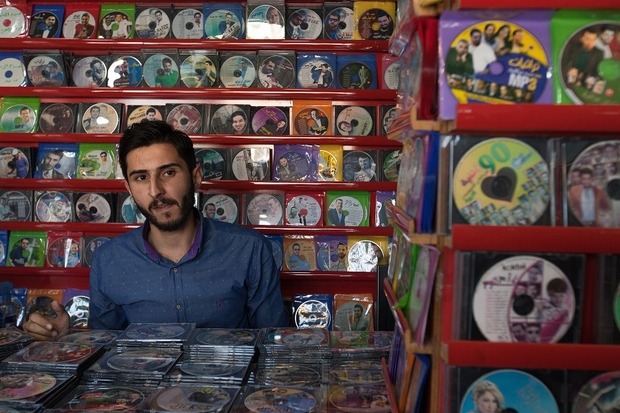 Having been forced to stop running the music shop, Sabah stayed at home for six months. During this time he felt lost and unsure of what to do with his life.

‘I have never stopped listening to music’

Ameen Mokdad, a 28-year-old violinist, recalls a big propaganda poster put up by IS after it took control of the city in 2014. The image depicted was an immense treble clef devoured by flames, and for Mokdad it was a sure sign that music would be banned.

"When you got in a taxi, if you did not have a long beard, long hair, or military dress, and if you did not seem too suspicious, then the driver would often play forbidden music on the BBC, a forbidden radio station," Mokdad said. 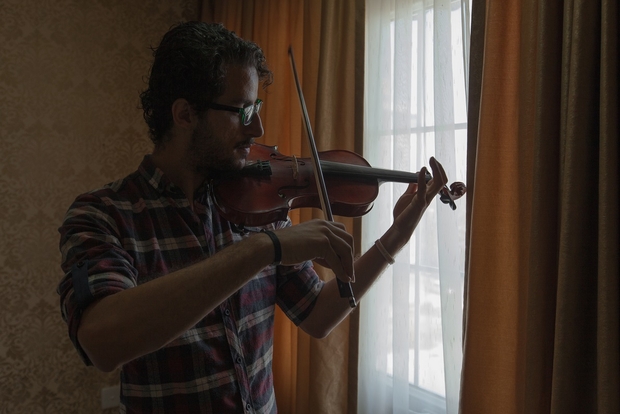 Yet despite the ban, Mokdad continued to play alone in the privacy of his home or with a small circle of fellow musicians.

"People never stopped listening to music in Mosul," said Hosham Dawod, French-Iraqi anthropologist at the National Center for Scientific Research (CNRS), who is now based in France but ran the French Institute of Iraq from 2011 to 2014.

According to local residents, only the type of music used in the broadcasts of Al-Bayan, the official radio of IS, was allowed. It was music without instruments and incantations that were not quite singing, with successions of voices praising the group that gave it some sort of rhythm.

In 2016, Mokdad was forced to flee Mosul after IS militants stormed his house and confiscated his instruments, deeming his music a violation of their hardline interpretation of Islam. He then escaped to Baghdad, where he now lives. Mokdad was able to return to eastern Mosul and give his first concert in April, after IS was driven out of eastern part of the city in January. 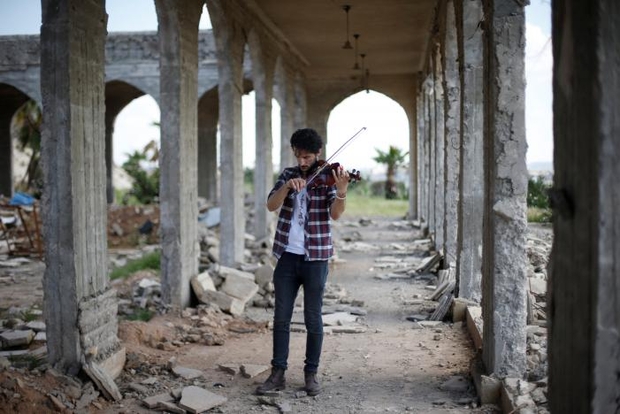 Ameen Mukdad, a violinist from Mosul who lived under IS’a rule for two and a half years, performs in eastern Mosul, Iraq on 19 April 2017. (REUTERS/ Muhammad Hamed)

Iraqi security forces, backed by the US coalition, have retreived most of Mosul since launching an offensive to retake the city in December 2016, but part of the west remains under IS control.

Karim Wasfi, 44, is the bandmaster of the national orchestra of Baghdad. Based in the Iraqi capital, he claims to know of 23 musicians who have fled Mosul for Erbil or Europe. Of Mosul, he said: "It was an avant-garde city for the establishment and the creation of Iraqi music. It was the result of the city’s cultural and social diversity, and a unique example of coexistence."

It is of no coincidence that major Iraqi musicians, such as Jameel Basheer and Munir Basheer, are from Mosul.

"Mosul was a creative city. We often compared Mosul to Aleppo for its imagination and its home-made production," Dawod said. 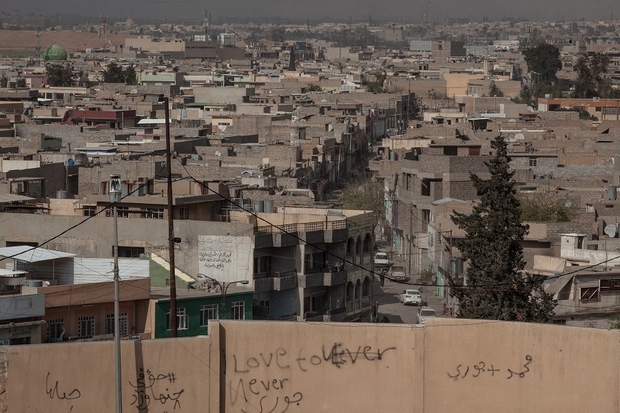 A view of the east side of Mosul (MEE/Sebastien Castelier)

But Mokdad and Wasfi admit that many years before IS’s arrival, the city took a "very conservative" turn and "pop or rock were never very popular there".

"People felt guilty about listening to music because they were exposed to the idea that it is sinful. There were no musical instrument stores anymore, and courses in music were held in private because people were afraid," Mokdad said.

Mokdad remembers a time when a guard at the entrance to his school did not allow him to bring his violin in, despite it not being illegal under Iraqi law. "Before 2014, I took lessons at home, and as soon as I took my instruments to school, people told me that it was forbidden. In fact, according to the law, it was not forbidden. Our laws came from Baghdad."

Dawod explained that after the fall of Saddam Hussein in 2003 and the dissolving of the Iraqi army, many former soldiers joined armed groups to help retrieve some of their lost power and authority.

"Mosul and its surroundings have always supplied numerous men to the Iraqi army, whether it was under the Ottoman Empire or under the British occupation," Dawod said. "While in 2003 the United States dissolved the Iraqi army, many of its high-ranking generals and soldiers were sent back to their homes, humbled, without a salary, and with the impression that they had lost the political power that was now reserved to Shias. Some entered the opposition, then fought for terrorist groups." 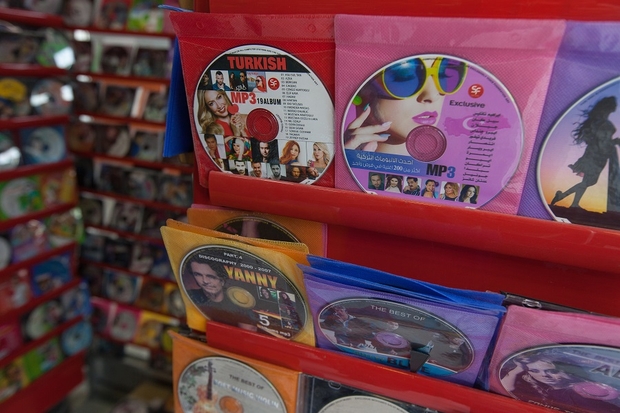 Despite being a minority, Sunnis ruled Iraq from 1932 until Saddam Hussein was toppled in the US-led invasion of 2003, when elections put Iraq’s Shia majority in charge of the government.

According to Dawod, after this Mosul - with a majority Sunni population - became more conservative and many former soldiers joined armed groups that ban music. Thus the city's tradition of art and tolerance receded.

"Some joined because they were opportunistic, while others joined because over time, they became convinced of the cause. In particular, there was an overwhelming will to belong to something which would distinguish itself from the international coalition, from the power of Baghdad," he said.

On Jamira street, in front of the immense university of Mosul that was destroyed by bombardments, and used by IS as a headquarters, Mohannad, a 24-year-old CD seller who preferred not to give his last name, reopened his shop 10 days ago.

"IS came, closed my store and burned my CDs," he said.

But today he is back in business and CDs by Celine Dion, Justin Bieber or Pitbull are available once again in east Mosul for 1500 Iraqi dinars ($1.30).