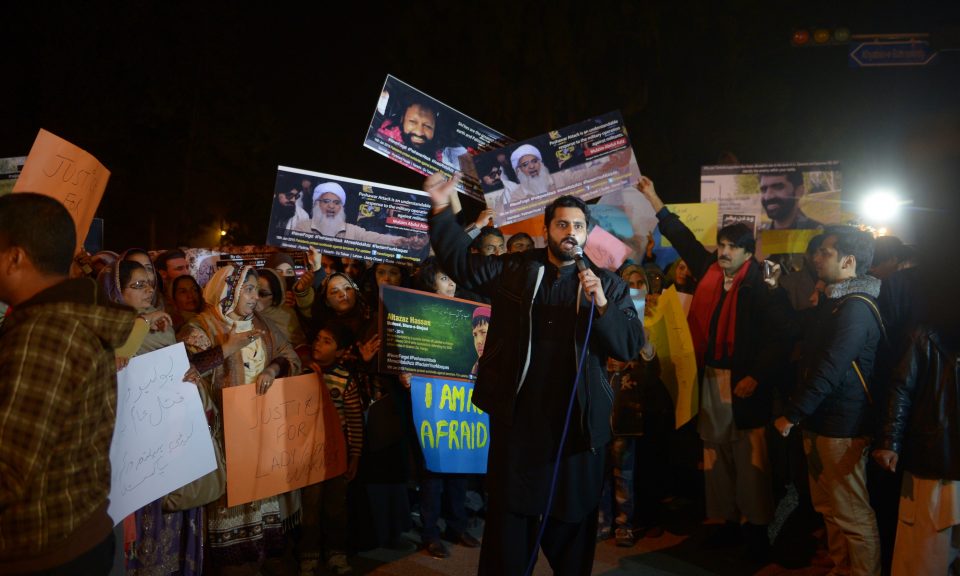 A new face is emerging in Pakistani politics and he will be tested in Wednesday’s crucial elections. After a massacre at the Army Public School in Peshawar in December 2014, considered the goriest terrorist attack in Pakistan’s violent history, 31-year-old lawyer Jibran Nasir led a massive protest against a notorious cleric.

Abdul Aziz, the Lal Masjid cleric who refused to condemn the APS attack that killed 132 children, had paid allegiance to Islamic State (ISIS). Nasir demanded his arrest for violating Section 122 of the Pakistani Penal Code.

Thus began Nasir’s #ReclaimYourMosques movement, where he urged local Muslims to fight to rid their mosques of clerics spewing support for violence. As his support base gradually increased, he also invited the wrath of radical Islamists; the then Taliban spokesman threatened him over the phone, telling him to stop pursuing the case against Aziz.

Four years later, the case is still pending in the Supreme Court.

Meanwhile, Nasir founded the non-governmental organization Never Forget Pakistan in memory of the 132 children killed in the APS massacre, and Pakistan for All, an organization fighting “religious extremism and state fascism.”

Jibran Nasir contested the 2013 general election as an Independent candidate in Karachi, only winning a few hundred votes. Five years later, he is giving it another shot in a campaign that has faced violent backlash from Islamist groups.

“You probably did not even know my name back then but are now asking me about my plans for election,” Nasir said early last month when he announced his plans to contest the elections in NA-247 (previously NA-250) and PS-111 (previously PS-113) – both constituencies in Karachi.

He says his aim is the protection of every citizen’s life, rights, and property and provision of basic necessities. Nasir’s manifesto was rated the highest by the Public Interest Law Association of Pakistan with an approval level of 70%, compared with the Pakistan Muslim League-Nawaz’ 66% and Pakistan Tehrik-e-Insaf’s 63%.

The numbers in his rallies and corner meetings in his locality have gradually increased over the past month. Supported by scores of young, tech-savvy volunteers, Nasir’s message has been spread through new-age social-media campaigns. It’s accompanied by door-to-door movements and distribution of pamphlets and banners in the area.

“They are my strength,” Nasir said of his volunteers, while speaking to Asia Times after a rally on Monday. His slogan, “Hum Mein Se Aik” (One of Us), has become a chant for youth, and a catchy anthem that features some of the biggest celebrities in the country.

But as the number of people donning #HumMeinSeAik T-shirts increases, so has the reaction of Islamist parties.

A target for Islamists

On Friday, Tehreek-e-Labbaik Pakistan (TLP) targeted Nasir’s campaign in Karachi’s Bizerta Lines area, tearing his posters down and throwing stones at his rally. Nasir, however, told his supporters not to respond with violence, insisting that their message is of peace and harmony.

As the TLP members cursed him and accused him of blasphemy, Nasir blew kisses back at them, saying that what the “misguided youth” needed were hugs and kisses.

But a blasphemy accusation is fearsome, as mobs have razed communities on mere allegations of insult to Islam. A TLP mob kept the capital Islamabad hostage last November over changes in the first draft of October’s Electoral Reforms Bill 2017, which they deemed blasphemous.

“What I want to achieve is that Pakistanis stop being afraid. I want to normalize it for people to say that right is right and wrong is wrong,” Nasir said. “I want to tell [the politicians] that they can rally the voters without involving religion, indulging in hatred or oppressing minorities.”

Nasir believes that his campaign is being targeted because he has “rattled” his opponents. “Nobody targets someone who is irrelevant,” he said.

Last week, Nasir was pressed by a religious group to declare Ahmadis, an Islamic sect excommunicated by the Pakistani constitution, as kafir (infidels) and curse at them. Nasir refused.

“This shows the extent of intolerance in Pakistani politics and the extent to which the hate campaign for Ahmadis is entrenched in it. People aren’t asking him about his agenda or ability, they are more interested in his beliefs, which are only satisfied if he abuses Ahmadis,” said Amir Mehmood, who is in charge of the Ahmadiyya community’s press office.

“Senior politicians should see that an independent candidate is taking [a] stand, and they should follow suit and indulge in politics of principles.”

Nasir echoed Mehmood. “If I win a sizable vote bank, I’ll be in a position to ask Nawaz Sharif, Imran Khan, Bilawal Bhutto and Jamaat-e-Islami why their representatives ally with banned [terrorist] outfits. If we can run campaigns, why can’t they, as established parties, do it without associating themselves with those who indulge in ‘kafir kafir‘ games?”

Nasir also lauded his supporters for standing firm despite the violent attacks, maintaining that if they weren’t scared he shouldn’t be either.

Hamza Baloch, a blogger and human-rights activist who is volunteering for the campaign, said the supporters drew courage from Nasir. “There are people from all religious and sectarian backgrounds, and that’s what gives us strength and delivers our message to the detractors. Unity does not lie in an ideological monolith,” Baloch added.