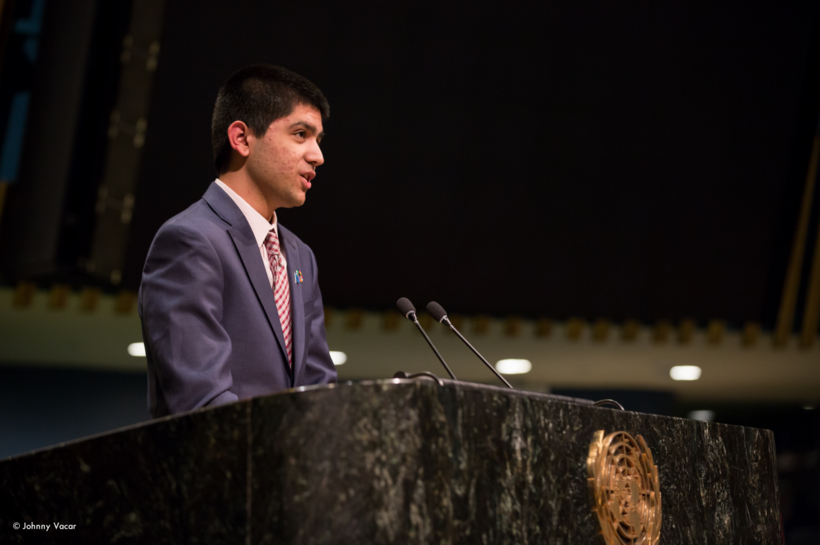 Syed Shoaib Hasan Rizvi addresses the youth delegates at the General Assembly Hall at the United Nations on February 2, 2017.

In all of my work in Pakistan, recognition–let alone acclaim–was never something I experienced. Four years ago, I waged an uphill battle against the conventional patriarchy in Pakistan because I had initiated my ‘I Am An Entrepreneur’ campaign, which provides microloans and mentorship training to skilled women who have the passion and drive to start their own ventures but lack the necessary resources. Having lived in Canada for a few years, I had experienced a culture where women receive support and encouragement, and so are a driving force in that country’s economic success. However, I faced ridicule and opposition from my fellow countrymen in Pakistan who thought I was wasting my time by helping women create their own ventures. At times I experienced great struggle but was able to persevere with inspiration from my mother and father who continued to believe in me, even as I sought to bring my message to the world through the Youth Assembly at the United Nations.

When I applied for the Youth Assembly, I was selected from over 700 distinguished youth delegates from 85 different countries as a recipient of the Outstanding Youth Delegate Award. After many years of hard work, I was able to bring my initiative to promote women’s empowerment to the global stage and I am honored to have received this esteemed recognition.

The Youth Assembly at the United Nations is a forum where youth leaders can learn new strategies and fresh approaches to enhance their work in achieving the Sustainable Development Goals (SDGs). During my two days at the United Nations, I was deeply inspired by the energy and enlightened thinking of the dignitaries at the majestic General Assembly Hall. We were mesmerized by H.E. Ms. Simona Miculescu’s passionate performance of “Strong UN Better World” and her wisdom on leadership. Jolly Amatya, Youth Chair of the Youth Assembly at the United Nations, shared her inspirational journey from Nepal to the United Nations. Ahmad Alhendawi, the former United Nations Secretary-General’s Envoy on Youth, encouraged delegates to “build a good story instead of building a good CV” and inspired us to continue along the rewarding path of service. Furthermore, Isabel Dobarro, Project Manager at the United Nations Sustainable Development Solutions Network, gave a powerful message that young people are the driving force that will not only impact our future but are changing our present.

It was a privilege to have attended the Youth Assembly and an honour to speak alongside such distinguished and dedicated global changemakers. It was a proud moment when Jolly Amatya called my name and the delegates at the General Assembly Hall applauded and cheered as I walked up to the stage, where I received my award for the Outstanding Youth Delegate from Ahmad Alhendawi. My speech was warmly received and my message that “women’s empowerment is not only a feminist concern – it requires collaborative action from social enterprises, NGOs, UN agencies, governments, banks, and the private Sector, and most importantly, men,” was met with particular enthusiasm. I felt renewed and revived having participated in this meeting of young minds and very grateful for the enthusiastic support I received from delegates after my speech. I return to my mission even more determined to rise above the ridicule and opposition of backward thinkers because I know that there are people who will continue to support me.

My campaign for women’s socioeconomic empowerment has led me to meet people who believe in my mission to unfetter the economic potential of women by bridging the participation gap in Pakistan’s workforce. I believe that if God gives you more in life, you have a responsibility to use your life as a force toward a greater mission. The women I have met lead hard lives. Seeing how one loan can change the trajectory of their lives and their children motivates me to continue to grow my vision. Earning an income secures a woman respect in the household and affords her economic independence. I hope to continue working toward my broader long-term goal to one day establish the first female micro-finance bank for underprivileged women in Pakistan. I have faith that with growing partnerships and perseverance, I can realize this dream.