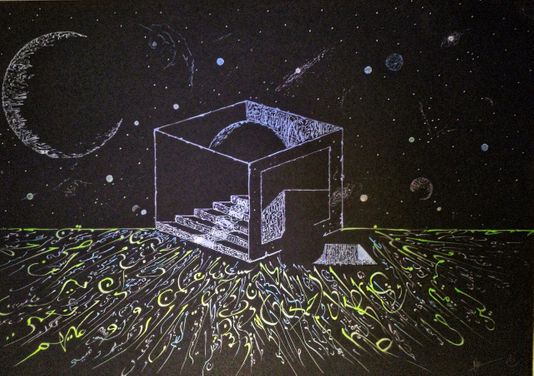 Looking for a sense of belonging in an era when Muslims often face suspicion and prejudice, Farah Rishi stepped across the threshold to another world, one of fantasy and scientific wonders.

In the pages of a novel by Octavia Butler, an African-American woman whose science fiction writings expressed her frustrations as a woman of color, Rishi found strength and inspiration.

“Here was a space this author carved out for herself, her people, her culture and her experience,” said Rishi, 28, an environmental law attorney born in the United States of Pakistani parents. “I wanted to do that too.”

Next year, Rishi, a Philadelphia resident, will publish her own science fiction novel, I Hope You Get This Message, about young people who save Earth from destruction by more advanced beings. She will join the ranks of Muslims who create or consume science fiction and fantasy.

Farah Rishi, a 28-year-old Philadelphia woman, turned to science fiction in an effort to find a place for herself in an era when many Americans are suspicious of Muslims like herself. Her first novel, a work of science fiction, will be published in 2109. (Photo: Mike Styer)

Accustomed to stories in which Muslims are more frequently sidekicks or villains, many of these writers make them central characters instead. One of Rishi’s three main characters is a young Muslim man. Her book will be published as a young adult novel, one of the hottest markets in the book world.

“Science fiction provides a way of speaking about the Muslim community that shows Muslims have the same concerns and issues as everyone else,” said Rebecca Hankin, a research librarian at Texas A&M University, home to one of the world’s largest science fiction collections. Hankin, a Muslim, said the genre “is concerned with climate change, science, race, with our place in the universe.”

Scholars say interest in other worlds is as old as Islam’s sacred texts, which include references to spectral creatures with magical powers called “jinn.” One Quranic verse exhorts jinn and humans: “If you can pass beyond the zones of the heavens and earth, then pass!”

“After the Arab Spring (uprisings that began in 2010) there have been a number of dystopian stories of good quality that reflect what is going on in those countries,” he said. Ahmad pointed to Frankenstein in Baghdad by Iraqi author Ahmed Saadawi, whose monster is created from victims of religious violence; Ajwan, by the United Arab Emirates’ Noura Al Noman, about an amphibious alien; and Egyptian author Mohammed Rabie’s Otared, a finalist for 2016’s International Prize for Arabic Fiction.

Hankin said science fiction written by Muslims outside the United States is often pessimistic because many work in an atmosphere of marginalization, oppression and violence. Muslim-American authors, she said, write “much more positive, heroic, and optimistic works that paint Muslims in much more favorable story lines.”

Detroit-born Saladin Ahmed’s 2012 novel Throne of the Crescent Moon was nominated for the coveted Hugo Award for science fiction writing, and S.A. Chakraborty’s debut novel, City of Brass, landed her on the “best of 2017” lists at Amazon, Library Journal and Vulture. She continues the tale in a sequel coming out in January. Both writers’ stories are about power struggles set in magical worlds based on historic Islamic kingdoms.

Ahmed said his great-grandmother read to him from both the Quran and the Arabian Nights. “All this kind of stuff was combining in my head, I think, and then slowly stewing together,” he said in an interview with Public Radio International. “It was inevitable that the things I write have all of that DNA.”

Besides being the author of several science-fiction novels, Razwan ul-Haq is a calligraphy artist who creates science fiction images, including imaginary planets, from Quranic verses. He finds that science fiction elements often make the biggest connection with non-Muslims, some of whom may be encountering positive Muslim characters for the first time.

Razwan Ul-Haq writes science fiction and creates works of art using calligraphy. He says the aspects of his work that use science fiction often draw the most interest from non-Muslims, who ask penetrating philosophical questions. (Photo: Razwan Ul-Haq)