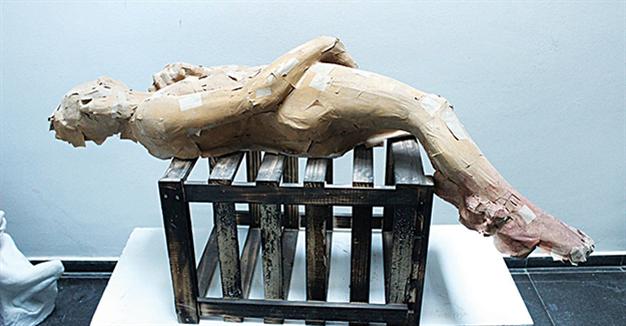 A male figure, totally naked, points a white stick at a murder of crows at his feet, keeping you guessing about whether he is a blind man with a stick groping his way through a complex puzzle or a tyrant trying to force the birds into a pattern. The name “Hierarchy” seems to favor the second interpretation.

“This is my most political work,” sculptor Mahmut Aydın explained to Hürriyet Daily News. “I wanted to touch upon the endless desires and insatiable ambition of mankind.”

Aydın’s political stance is as stark as his sculptures. He deplores hierarchy, censorship and any attempt to cover the naked – that is, his naked statues, which carry a strong sense of irony and the courage to rip off clichés. Another naked figure, blind-folded, kneels in total prayer before a military helmet. The work is called “Itaat/Submission.”

In another corner, two female figures stand, legs apart, all their joints loose, their necks barely held up, shoulders sagged. This one is called “Censorship.” Another work shows a head partly destroyed by a form that resembles either a make-shift axe or a highly-figurative gun that is put at one’s temple. The name of the sculpture is, not surprisingly, “Auto-Censorship.”

“There is intervention to every aspect of our life – or, at least, a desire to do so,” Aydın said. “I am sick and tired of this. Hence, I have decided to use the theme of censorship in my work; censorship on thought, censorship on sexuality, censorship toward members of a race, belief or based on any other form of discrimination.”

He may consider “Hierarchy” his most political work, but others are equally so, particularly his series on “(not) wearing the veil,” where a wooden female figure is covered by an iron veil that covers her head and mouth, but leaves her breasts and genitals bare.

“Sculpture is an art form which has been on the rise in Turkey recently,” he said. “But art itself has become more conservative.  We make art through our concerns for form, to voice our inner struggle – the fact that the human form we create happens to be naked is nothing beyond that. I find it amazıng that there are people who perceive them as sexual objects or idols.”

Aydın, born in 1989 in the southeastern province of Diyarbakır, has displayed his works from Istanbul to the resort province of Bodrum and from his hometown to the capital Ankara. He was displayed in the Aegean province of İzmir for the first time, at the Narartiz Gallery in Konak Pier, a historical structure designed by the office of Gustave Eiffel.

“The sculptures were very much appreciated and have sold well,” said the gallery’s founder, Defne Atakan Beşer, who added that the famous “Hierarchy” had been bought by an Istanbul collector. A day after the opening, Aydın headed back to Istanbul, for the opening of Elgiz Museum’s “Skyline” exhibition, an annual affair that he has participated in with his works since 2014.

“There is a great passion in him. Academics and his peers consider him a young artist with a great future,” said Beşer. “Besides having a good technique, he is able to reflect emotions in his work; a vulnerability and romanticism is also present in the statues.”

Aydın’s outstanding work seems to focus on what he detests, rather than what he desires. “I was just too bothered with censorship – and then with hierarchy as a concept,” he said. “I try to keep away from focusing too much on themes. I think the quality of a painting is in its form, not in its theme or name. Yet, there are things that bother me – such as censorship, such as hierarchy, anything that limits and binds us – that creep into my work.”

Although his work has evolved, he continues to use the human form. “The human form will be one of the favorite subjects – in the future and in the past. But I do think that there is something that is still undiscovered about it,” said Aydın.